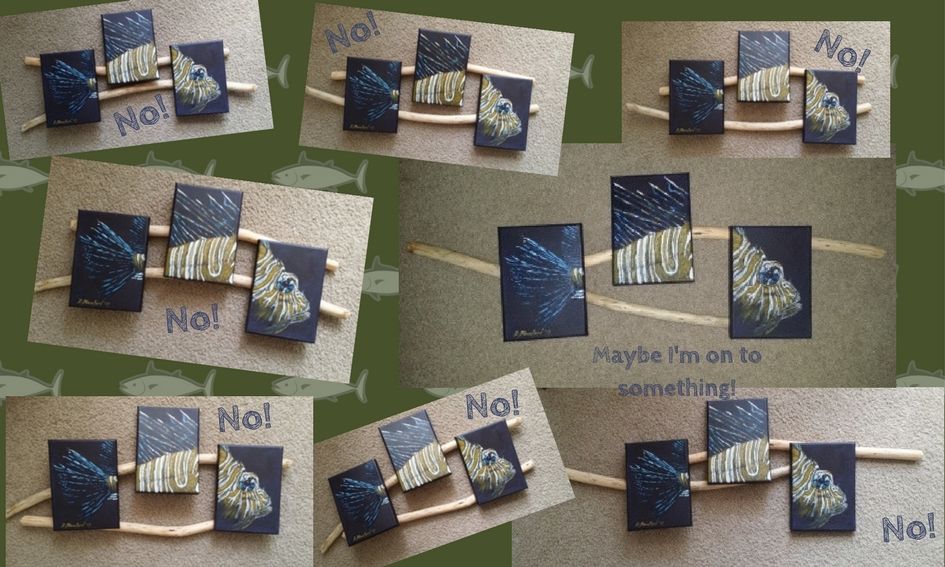 The creative process is an interesting thing.

Sometimes you plan with a specific end goal in mind and you don’t come anywhere near to reaching it. Other times you exceed your expectations. Then there’s the times that you start out with only the most basic concept and the work evolves into something special. That’s what happened with this particular piece.

I had three small canvasses (180mm x 130mm) that had been lying around for years. They seemed a bit small for anything useful. One day I just decided to do some small paintings for fun, with no expectation attached to the result. I had some photos of a lionfish and I loved the patterns along with the pouty face. I had so much fun doing the face that I then thought I would do part of the body and the tail on the other canvasses. It was only as I completed these that I could see that they kind of formed a complete fish but with parts missing. But that was fine because I had done this painting purely for pleasure. I put the individual paintings away.

And there the story may have ended but for the random recurring thought that I could combine the individual paintings into one painting in some way. Eventually I came up with the idea of using wood to join them. I had planned to use driftwood but one day when I was out I came across a couple of pieces of weathered wood (it’s actually California Redwood) and decided to explore the possibility of using them.

I didn’t trim them in any way. Other than scraping off some excess bark they are essentially as I found them. I played around with lots of combinations using the two pieces of wood. I was getting frustrated and was about to give up when I noticed that the curvature on one piece of wood seemed to follow the backbone of the fish. I played with that concept and used the other piece to form the lower part of the “body” of the fish. I left the overhanging parts of wood just as they were because they gave a nice movement and symmetry to the piece. From a practical point of view they also provide a hanging point.

I called it “Lionfish Concerto” because a concerto is a piece of classical music that consists (generally) of three parts. My lionfish consists of three parts, hence….

All in all it was a happy accident that turned out pretty well. It has certainly got plenty of comments from friends. As an added bonus someone was so taken by Lionfish Concerto that they had to have it.